About the Caberfae Ski Club

The Caberfae Ski Club is located at the base of Caberfae Peaks Ski Resort. Although the Club is private, anyone is eligible to join (subject to available openings). Caberfae Ski Club's clubhouse building is just steps away from the Clubhouse chairlift, MacKenzie Lodge, and Blackmer Daylodge. The vintage two-story building overlooks the slopes with huge picture windows. The Club's proximity to the ski trails is unique in all of Michigan skiing. Inside, the clubhouse features its own food service, a full bar, bathrooms, a fireplace, changing rooms, locker rooms, and several lounging areas to enjoy with family and friends. Throughout the ski season special activities and events make the Club a center of ski and social gatherings all winter long. In addition, several off-season get-togethers keep members in touch.


The area, formed and built by the Civilian Conservation Corps, had toboggan slides and downhill ski trails but no up-hill transportation. The club soon installed an old Dodge engine and an engineer/member from Shakespeare Fishing Gear of Kalamazoo designed a rope tow. Heavy leather chopper mitts and woolen clothing were the styles of the day. Telemarking and ski jumping were popular slope activities. Ski jumps of 15 and 30 meters were available along with a downhill and slalom race hill.


Skis, primarily from Northland and Lund, came in sizes 6 foot to 8 foot lengths in hickory, ash, hard maple and pine. Bindings consisted of metal or leather toe pieces and pliable, waterproof leather heel straps adjustable for touring, slalom, downhill, or jumping. Logger's boots were remodeled with a grooved heel for ski bindings; but professional leather ski boots were available from Bass Sports of imported from Scandinavia. Most kids wore galoshes over their shoes, thus, the first buckle boots. Poles were of cane or bamboo with laced leather baskets.


Immediately the club purchased two Packard engines for $103.00 plus other necessary materials for $58.59. These were delivered to Camp Axin, the C.C.C.camp, on January 12, 1941. Oldberg Engineereing Co. donated two mufflers, two instrument panels, and one transmission for $79.46. So two more rope tows were added for uphill convenience.


The local high school kids were transported by school buses on Saturdays to ski until the area closed in March 1942 due to World War II. Thirty-six members retained their membership until the area reopened in 1946.


With the return of veterans, many of whom served in the 10thMountain Division Ski Troops, the Club membership increased to 105; 35% were from the Cadillac area. A ski patrol was formed under the direction of "Buck" Rogers of Manistee and the ski school was directed by Monty Montague of the 10th Mountain Troops.


The ski area which was on U.S. Forest Service land was surrounded by farms. The ski club, in 1947, purchased one acre on the west side of the ski area from the Henderson family for $200.00. The ski area was operated by volunteers and was called Caberfae, Inc., a Scottish word meaning "Stag's Head". The club members concentrated on clearing their acre to build a club h6use and dedicated it in 1953.


Notable members of the ski club were Gerald Ford, prior to becoming a Legislative House member and President, and his buddy and fraternity brother Jack Stiles who became Ford's campaign chairman. They built a cabin on the site of the current McKenzie Lodge. Both had served in the naval battles of the south pacific. Others included Larry Rubin and Don Stearns, head and comptroller respectively of the Mackinaw Bridge Authority, Paul Bailey, founder of Arby's and a major investor in the Copper Mountain Ski Resort, Colorado., and Anson "Tony" Hedgecock, Jr. (deceased 3-16-14). Tony was coach of the men's alpine team from 1975 through the 1980 Lake Placid Olympics and was a major national sales rep. for ski equipment.


The present club house has a large rotunda, a second story sports bar and lounge, large restaurant with seating for 60 or more, ample ski lockers and a boot room. The private parking lot adequately handles the membership's needs. Two fireplaces provide comfortable ambiance for the 180 members, mostly families, with two very active surviving life members. Currently the club has a waiting list of 25, which attests to its popularity at a very desirable ski resort. 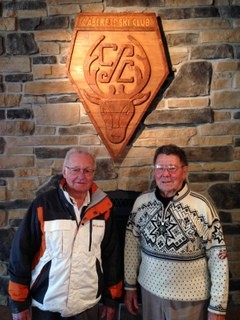 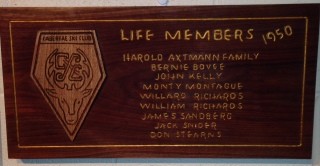 History of the Caberfae Ski Club


Caberfae, the Scottish name for Stag’s Head, was granted to Colin Fitzgerald, founder of the MacKenzie family in the year 1255 by King Alexander III of Scotland, whose life Fitzgerald saved from a hunted stag deer. The name of Caberfae was applied to the land around the present ski area by Kenneth MacKenzie of Chicago back in the year 1919. Because of his ancestral background and the large number of deer herd in the area, he called it Caberfae.

The area originally encompassed 28 square miles and was intended as a beef ranch. The ranch ended as a failure after 7 years and the land, in part, was purchased by the United States Government for National Forest purposes. A fire tower was erected near the top of what is now the North Peak Run (formerly known as "Number One") at the ski area.

During the 1930's, some residents of Indiana, Grand Rapids and Cadillac were participating in winter sports, and were interested in starting a local ski area. The United States Forest Service co-operated, and a winter ski area was created, with a Civilian Conservation Corps building and a single ski run, known as "Number One" being built. The first ski lift, a rope tow, was powered by a Ford Model A car engine. This engine was later replaced by a Packard Motor car engine. The area now occupied by the South Peak ski runs was known as "The Bowl."

The first official opening of Caberfae was held in January of 1937. In 1939 some of the originators of the ski area formed Caberfae Ski Club. The club was responsible for many improvements at the area. Operation of the ski area became too much of a burden for members of the ski club because of the geographical distribution of the membership. Therefore, operation and control of the area was turned over to a newly created group, the Caberfae Winter sports Club, Inc., which was formed by the Caberfae Ski Club and the Cadillac Chamber of Commerce. The new group was issued a non-profit permit to operate the ski area by the U.S. Forest Service. The ski area was not operated during World War II, but reopened shortly after the war ended..

Ski club representatives served on the board of Caberfae Winter sports until 1968, when the organization became a "for-profit" stock holding company. In 1982, the ski area went into bankruptcy proceedings and in 1983, Cadillac Associates, forerunner of the present ownership, acquired the assets of the ski area from the bankruptcy court and assumed ownership of Caberfae Ski Area, which is currently known as Caberfae Golf and Ski Resort.

During the 1930s, the club members held their meetings at the Sportsman Port Canoe Resort, located on M-55 near the area. After World War II, the club met at a Cadillac restaurant. In 1948, the club acquired a one acre parcel, which was part of the old Henderson farm directly adjacent to the ski area. During the early 1950s, the club members built the "Round Room and the "Teen Room." The first official club house opening was held on January 3, 1953. Two major additions and several minor additions have been added to give the club full food service, a club bar and lounge.

Click on the vintage photos below for larger images and captions. 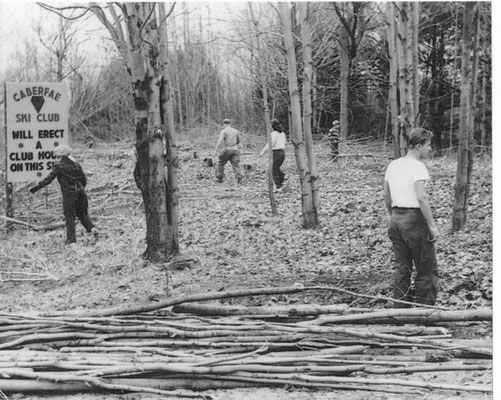 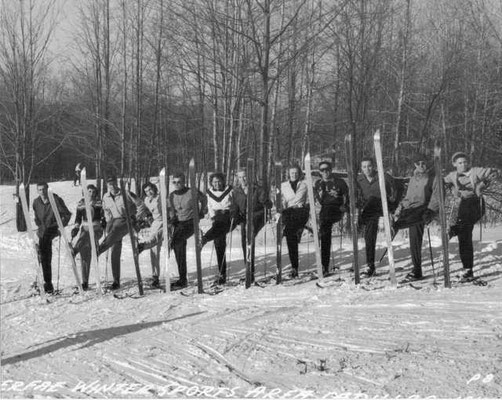 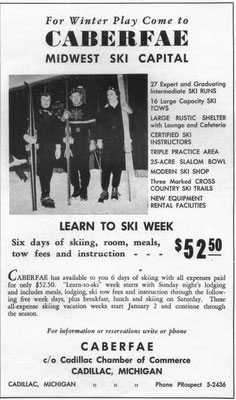 Cadillac memorabilia collector Rich Edwards shared these images of classic Caberfae matchbooks. Pictured here are the fronts and backs. The one on the right might be of particular interest because of the resort's one-digit phone number -- Hoxeyville #3.

(Click on a photo to see a full size image.) 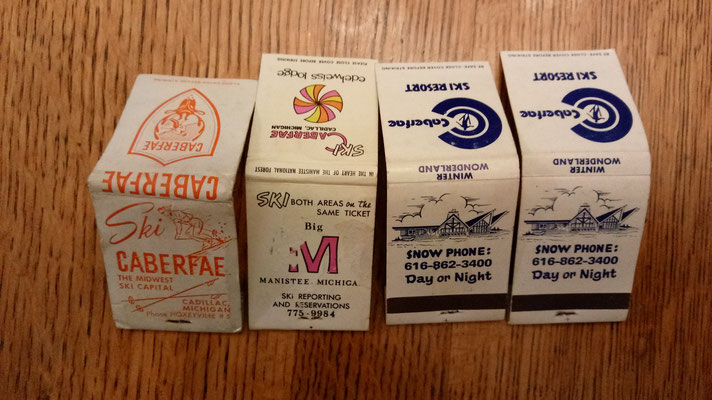 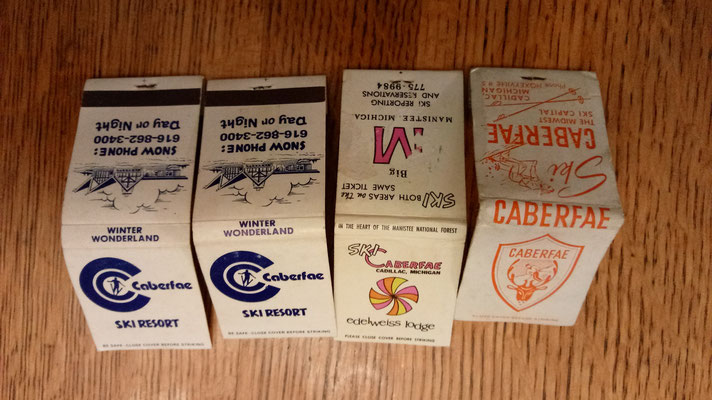 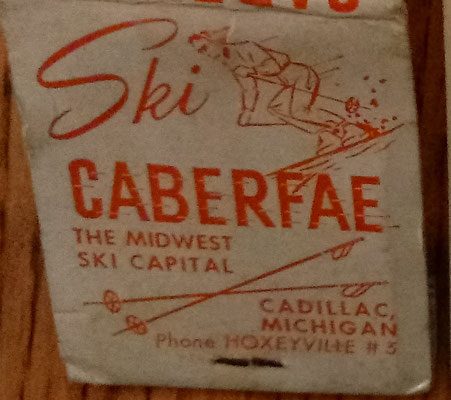